James was educated as a music scholar at Merchant Taylors’ School, Northwood and studied the Piano with Rachel Lambert.  As a sixth former he attended the Junior Royal Academy of Music, furthering his playing under pianist Graham Caskie who instilled in him a love of French and contemporary music.  At the end of his schooling he performed Rachmaninov’s 2nd Piano Concerto with the MTS orchestra.

He went on to study Music at Pembroke College, Oxford, where he held an instrumental scholarship.  He graduated from Oxford in 2008 and, having been awarded a high first in his Performance Finals, he applied to study Solo Piano at the Guildhall School of Music.  There he completed his Masters under Debussy specialist and scholar Paul Roberts, achieving distinctions in his recital exams and receiving a scholarship from The Leathersellers’ Company.

During his time at the GSMD James developed an interest in the Alexander Technique and its capacity to identify causes of tension thanks to the inspiring piano professor Nelly Ben-Or.  He was struck by the improvements in tone, fluency and ease which he experienced from applying the Alexander principles and so decided to continue his studies with Nelly after leaving the GSMD; he is currently enrolled on her Alexander Teacher Training course. 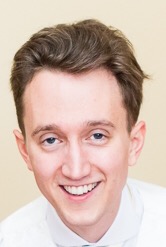